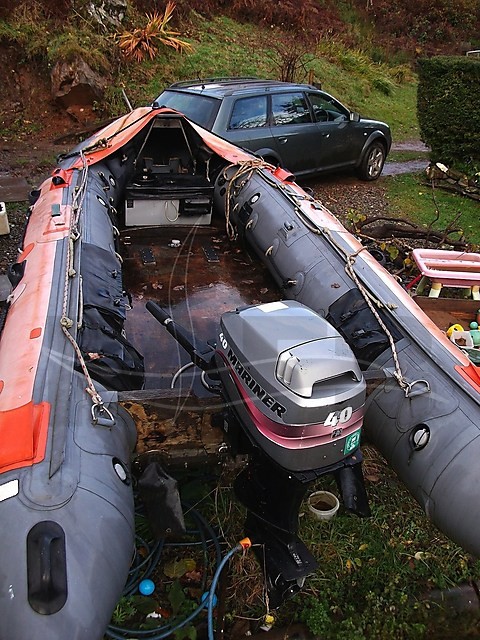 4Mt D class ex RNLI inflatable life boat with six individual compartments that hold there air as they should,one valve cover is missing, Not used in the past two years but run every now and again with muffs,engine states 2002, but the rib looks older

The engine runs well,but it has one part of the carburetor disconnected, this would double the speed if reconnected, but we have been using it as is as it is plenty fast enough, for our young children, it had new gearbox oil this year in its annual service,

The rib was striped ie floor out frount and main, with the floors dried, i put four coats of marine grade varnish on them top and bottom, also the transom was varnished, the bottle screws that keep the floor tight were sand blasted, i think i painted them but not totally sure, this was done three seasons ago,

The transom appears to be in good condition heavy grade Marine ply with everything bonded as it should be, no signs of rot

The picture you can see were the glue has come away from the bow cleat that was damaged and is not there, just needs to be cleaned and re glued,the rest of the rib is in fair to good condition the rib needs to be cleaned, and its ready to go

We had grate use out of it, it goes into really shallow areas and was grate for exploring, the engine has a gas aided trim and tilt that works as it should the only reason we stopped using it was that we got a bigger rib craft that might also be for sale

The trailer was home made and works well for short journeys, and could do with new wheel bearings

it would again make a grate family boat, it served us well, the engine itself is worth 1200 and i would consider splitting but it would be a shame to do so,

no dodgy ill send you a bankers draft,my shipping agent will pick it up,what s your best price ect Bank transfer or cash on collection only