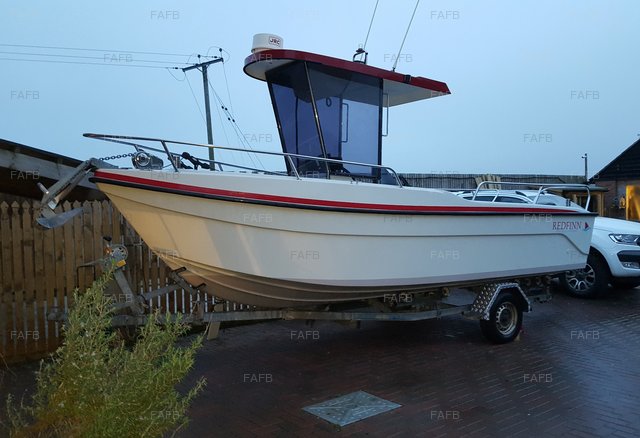 POPEYE has 2 x forward mounted rod holders- great for drift fishing- with 3 x tube gunwale mounted rod holders for rod stowage while traveling between marks, 2 x transom mounted rod holders (factory fitted) and one Starboard mounted rod holder. The boat has a flush deck mounted hatch with large storage facility beneath the deck and 2 x transom hatches offering storage and access to the bilge pump. The freeboard height is exceptional and makes this a very safe boat if you want to take young children fishing. The clutter-free deck also make fishing her safe and easy to move around. I have fished 4 guys easily from her without everyone getting in each others way. The fuel tank is mounted in a seat box forward of the centre console and holds the 25ltr fuel tank with quick release fuel fitting (room for spare fuel cans also in seat box) - new fuel line fitted with 2 x fuel pump bladders (one inside the transom hatch and one in the transom well- 2 x fuel pump bladders ensures if one fails you can still pump fuel if necessary) and one inline fuel filter. The REDFINN has self-bailing decks so she can be safely kept on a mooring without the worry of the deck flooding.

I purchased the boat from a guy in South Wales in the Summer of 2017 while waiting for my Hardy 24 to be commissioned built as I didn't want to be without a boat for the Summer wreck fishing off Dover. I chose the REDFINN as they have such a good reputation for speed and stability as they are predominantly fished off the Irish coast so are renowned for their sea keeping qualities- I believe the hull designer is the same guy who designed the Warrior 175 hull.

My new HARDY 24 arrived at the end of November 2017 and I have kept the REDFINN as she is such a joy to use- very stable at anchor, can handle very rough seas and dry underway. I have made over 30 trips (she is a superb drift fishing boat due to low wind resistance) and the engine and boat have performed without fault, everything thing on the boat works without fault - my average trip is around 30 miles chasing fish on the numerous wreck out of Dover and POPEYE is fast and fuel efficient.

Being a 2001 boat with 2004 outboard she is not like new, she has marks commensurate with a 17yrd old boat but in general is very nice for her age, clean and tidy with everything working as it should!

POPEYE IS READY TO FISH WITHOUT THE NEED TO DO ANYTHING TO HER.